You are here: Home / Blog / “Year-Round” Homeschooling: The Beginning 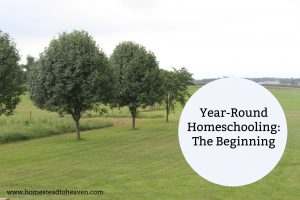 Before I go any further, this does not mean that we’re doing school 52 weeks a year. Rather, it means our schooling is spread out a little more through-out the year to allow for more breaks, instead of all the free time being clumped in the summer.

Our school year started on July 23rd with a week break after the first three weeks, so that puts us at week 6 in our home school year.

We started out full of anticipation, with a lovely spread of learning ahead of us. Now, at week 6, we’ve started learn what to tweak in our routine and what to trim from our curriculum.

For instance, the first 2 hours of our day were packed with morning chores, eating breakfast, and an hour’s worth of bonus curriculum pieces, such as singing – all by 8:30 AM. I’ve trimmed out most of those extras in the morning and left religion and memorization. However, those still don’t happen until after breakfast. Now, instead of “go, go, go” first thing in the morning, I’ve allowed for a more relaxed morning to eat, get chores done, and wake up, and we start school between 8 and 9 AM. This has been amazing for me as well, because I just physically can’t keep up with that kind of pace. Slow and steady wins the race… 😉

I had also set aside 1-on-1 time with each kid for 30 minutes to do math and phonics. That’s 1 1/2 hours for two subjects that don’t need that much time in these early years. Last week I started having the all kids do math at the same time instead of 1-on-1. It seems to be working out pretty well, but I’m still tweaking it a bit as it can be chaotic at times. Then I still do about 15 minutes worth of phonics 1-on-1 with each kid.

The rest of the day pretty much goes as planned. I’ll share more of what we’re doing in another post.